Following the opening day of the Portuguese Grand Prix, Pirelli’s Mario Isola sounded satisfied with the behaviour of the Italian manufacturer’s three compounds on the circuit characterized by rapid rise and fall.

While the Autodromo Internacional do Algarve presented teams and drivers with a fresh challenge at the end of last year, the field returns to the city of Portimao with the experience they gained during the inaugural Portuguese Grand Prix. Last year, teams were challenged by low grip on the freshly resurfaced track.

Although, six months of weathering have improved matters, Pirelli stick to the more durable end of its spectrum with the C1-C3 compounds nominated for this weekend.

Get ready for round 3! Here’s the #Fit4F1 info you ought to know as we head into the #F1 #PortugueseGP race week! 🇵🇹 https://t.co/z1hhG5we8c pic.twitter.com/S8noIxzeCO

As for Friday’s sessions, the afternoon practice was somewhat warmer than the morning, with track temperatures peaking at 39 degrees centigrade and ambient temperatures in the region of 20 degrees centigrade. There was also some wind in the afternoon, which ocCASionally affected the aerodynamic performance of the cars. The FP2 session was delayed by 10 minutes due to safety checks on drain covers, but ran for the full allocated hour. 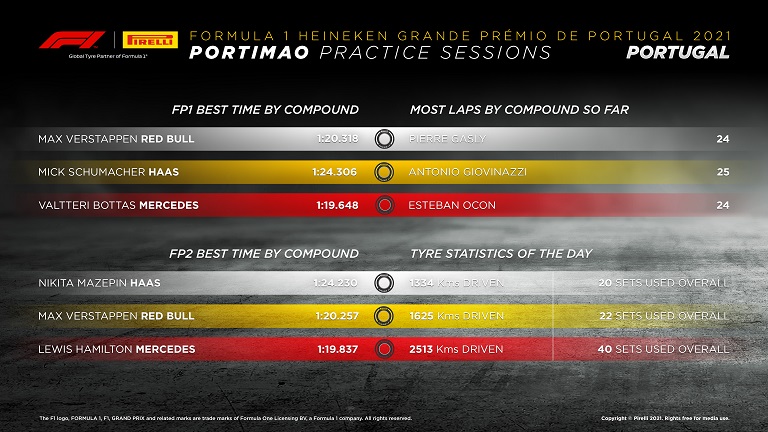 Commenting on Friday’s running, Pirelli’s Head of F1 and Car Racing Mario Isola said: “It was a reasonably straightforward pair of free practice sessions in Portugal with no big surprises, apart from a bit more wind in the afternoon that affected the times slightly, making the track slower. The tyre performance exceeded expectations, with just a little bit of graining on the front left of the softer compounds in the morning on a ‘green’ track.

“This improved in the warmer conditions of the afternoon. The track surface is still smooth making it sometimes challenging for the drivers to find the right level of grip. With a big pit stop time penalty, it should be a one-stop race on Sunday for the majority of drivers and we can already see that all three compounds could play an important role in this – which is why all the compounds were run extensively throughout the day,” the Italian concluded.

By admin
19 hours ago