Formula One’s sole tyre manufacturer Pirelli is unsure about the best race strategy for tomorrow’s 36th Hungarian Grand Prix with both the one-stop and two-stop strategies possible for the 70-lap Budapest race.

The qualifying session for the Hungarian Grand Prix saw Mercedes driver Lewis Hamilton claim his 101st career pole ahead of his team mate Valtteri Bottas. Championship leader Max Verstappen was fastest in the first two qualifying sessions, before Hamilton sealed pole by going quickest of all in the decisive Q3 session.

Although temperatures were slightly lower than yesterday’s record-breaking values, qualifying was once again run in very warm conditions: 31 degrees ambient and 54 degrees on track at the start of the hour.

Pirelli brought the three compounds from the middle of its range with drivers being allocated two sets of C2 hards, three sets of C3 mediums and eigth sets of C4 soft tyres in this weekend’s race in Hungary – the same nomination of compounds as it was last year. All three compounds have stood up well so far despite the challenging weather conditions both on short and long runs, but it is worth noting that the gaps between the different tyres have been quite significant.

This motivated the majority of the drivers to use the C4 soft compound in qualifying with only the Mercedes and Red Bull drivers trying to progress to Q2 on the yellow-walled medium compound. However, Max Verstappen and Sergio Perez felt that their car was not strong enough to get through safely to Q2 on the C3 compound, leaving only Lewis Hamilton and Valtteri Bottas with the theoretically better race compound for the start of the race.

The race strategy at the Hungaroring is usually clear-cut as it is notoriously difficult to overtake on the twisty layout of the Hungarian race track, meaning that track position is often more important than pure pace. However, the extremely high temperatures experienced this weekend could mean that other strategy solutions might come into effect in the 36th Hungarian F1 race.

The Milan-based Pirelli estimates that it is finely balanced between a one-stop and a two-stop strategy, with both approaches valid for the race, but a two-stopper being on paper quickest.

Temperatures are promised to be hot again in the race, so mainly the starting compound will be the decisive factor when it comes to race strategy. Pirelli thinks that those starting on the P Zero Red soft C4 tyre could favour a two-stopper, with a number of potential options involving a switch to the P Zero Yellow medium C3 tyre for the last two stints or possibly even a final run on the soft tyre at the end of the race.

Those starting on the medium tyre can definitely try a single-stop race, by switching to the P Zero White hard C2 tyre for the remainder of the race. But soft to hard is also possible, although slower. 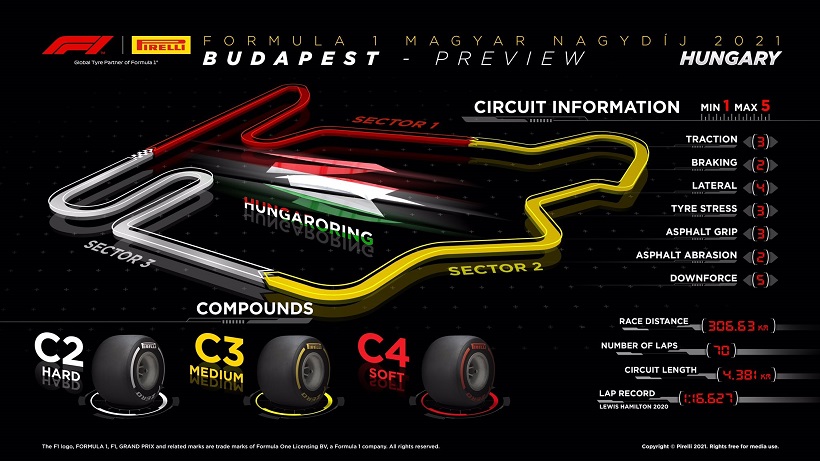 Commenting on today’s qualifying session, Pirelli’s Head of F1 and Car Racing Mario Isola said: “Today’s track temperatures in qualifying were only a little bit cooler than yesterday. As a result, although the soft tyre retained a significant speed advantage of nearly a second over one lap, preparing the flying lap carefully was important to avoid overheating.

“The drivers starting on the medium tyre have more flexibility, which could bring them a benefit, but a two-stopper is slightly quicker than a one-stopper on paper, which means that the drivers who start on the soft have every possibility of doing something different – with a wide range of tactical options available. Mercedes and Red Bull have taken a very different approach, so it’s going to be fascinating to see how that battle develops from the first and second rows of the grid,” Isola concluded.

By admin
11 hours ago