All the drivers used only the soft tyre in Q1, with the exception of Alphatauri’s Pierre Gasly, who used just the P Zero Yellow medium. In Q2 – which determines the starting tyres for the grand prix – both Mercedes drivers, the Red Bull of Verstappen, and Ferrari’s Carlos Sainz set their best times on the medium (although a total of eight drivers attempted to do so). 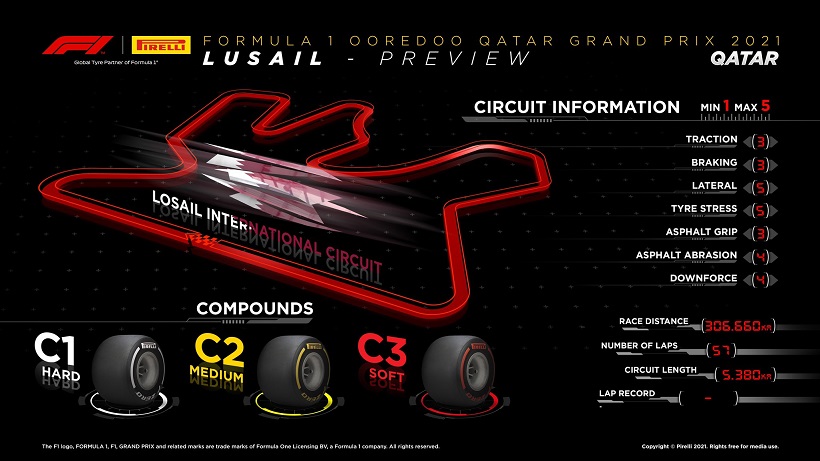 Close to that is another two-stopper, but this time with one stint on P Zero Red soft C3 followed by two stints on the mediums.

All three compounds could also be used in alternative two-stopper (maybe starting on the medium and running the hard in the middle before moving to the soft for the final part of the race) but this is likely to be slower. As always, all these stints could be run in any order.
The Milan-based tyre manufacturer advices against a one-stop strategy because tyre wear appears to be quite high.

Pirelli’s F1 and Car Racing Mario Isola said: „Track evolution remained high today, also with no support races on the schedule, which meant that we saw the fastest times right at the end of qualifying, and some medium tyre times in Q2 that were faster than the soft tyre times in Q1.

Here are the race sets for the #QatarGP. Will those new sets of medium tyres come in handy during the race? #F1 #Fit4F1 #Formula1 #Pirelli pic.twitter.com/9EnFpM1mYk

„With just short stints in qualifying, and FP3 this morning taking place in the heat of the day (with a focus on qualifying) the teams can only rely on FP2 for relevant long-run information, which is crucial when it comes to formulating the strategy.

„Under these challenging circumstances they will want to keep their options as open as possible, which is why the championship contenders chose to start on the medium tyre. However, as Q2 showed, it wasn’t easy to get through the session on the medium, so we’re set for an interesting mix of strategies tomorrow with many factors still relatively unknown,” Isola concluded.

By admin
15 mins ago

By admin
44 mins ago

By admin
7 hours ago