Formula One’s sole tyre supplier Pirelli expects the majority of the field to execute a one-stop strategy at today’s Portuguese Grand Prix based on the tyre behaviour during Friday’s long run simulations.

While the Autodromo Internacional do Algarve presented teams and drivers with a fresh challenge at the end of last year, the field returns to the city of Portimao with the experience they gained during the inaugural Portuguese Grand Prix. Last year, teams were challenged by low grip on the freshly resurfaced track.

Although, six months of weathering have improved matters, Pirelli stick to the more durable end of its spectrum with the C1-C3 compounds nominated for this weekend.

Get ready for round 3! Here’s the #Fit4F1 info you ought to know as we head into the #F1 #PortugueseGP race week! 🇵🇹 https://t.co/z1hhG5we8c pic.twitter.com/S8noIxzeCO

Pirelli thinks that the 66-lap Portuguese Grand Prix will be a one-stopper, for two key reasons: firstly because the time lost in the pit lane here is too costly to make a two-stopper work, and secondly because wear and degradation on all the compounds seems quite low. With the Portimao circuit being reasonably wide and presenting plenty of overtaking opportunities (as proved by last year’s race) the tyre nomination here should allow the drivers to push hard and deliver a lively race.

The low wear and degradation should also create quite a wide pit stop window, meaning that the teams will be able to adapt their strategies to take advantage of the best possible moment to make their stops, ensuring track position. As usual, the timing of the stops will also depend on track and air temperatures – which are likely to be similar to today, or perhaps slightly warmer. 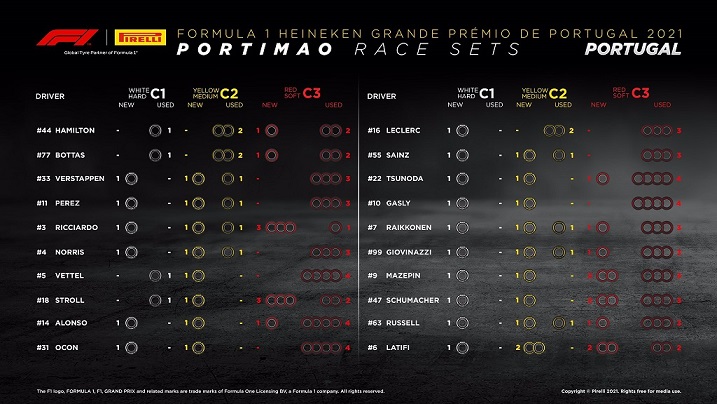 Of the top ten, four drivers could have a slight strategic advantage. During the Q2 session, which determines which starting tyres the top 10 on the grid will use, most drivers headed out on the medium, with just six starting the session on the P Zero Red soft. In the end, five drivers in the top of the grid will start on the medium tomorrow including the top four: both Mercedes, both Red Bulls, and the Ferrari of Charles Leclerc.

Commenting on the thrilling qualifying session, Pirelli’s Head of F1 and Car Racing Mario Isola said: “As they did last year, Mercedes selected the medium in Q3, but this year they were unable to improve on their first Q3 run using the soft, underlining the different ways of thinking that we are likely to see tomorrow.

+A one-stop strategy is most probable but the teams are likely to have a few different options when it comes to the timing of the stop. Tomorrow the top 10 is split 50-50 as to which tyres they will start the race on, with those starting on the medium tyre having more tactical flexibility but those starting on the soft not at a disadvantage either.

“Qualifying shows that all three compounds are set to play their part in the race tomorrow, with all of them also being a valid option for the final stint, depending on individual run plans,” concluded Isola.

Fast facts ahead of the Portuguese Grand Prix

By admin
21 hours ago