The one-stopper has been the favourite strategy in recent times in F1 races, but today’s 71st F1 grand prix held in the United States is expected to drive teams towards a two-stop strategy given the high temperatures and high-speed corners of the Circuit of the AmeriCAS.

After a Mercedes-dominated Friday at Austin, Red Bull driver Max Verstappen bounced back when it really mattered to claim pole position in front of his championship rival Lewis Hamilton. The Dutchman scored his 9th F1 pole position in 2021 on the soft tyre, but he will start the race tomorrow on the medium tyre, with which he set his fastest time in Q2. All the drivers used only the soft in Q1, saving the mediums for later.

Including Hamilton, a total of eight drivers got through Q2 on the medium tyre, meaning that this will be the compound on which they start the race tomorrow. Only Ferrari’s Carlos Sainz and Alphatauri’s Yuki Tsunoda set their best Q2 times on the soft, starting from fifth and 10th on the grid respectively.

With the high temperatures and high abrasion at COTA, a two-stopper looks optimal tomorrow, especially as the warm weather is expected to remain for the race.

Pirelli thinks that there could be a variety of two stops strategies in today’s 42nd United States Grand Prix with the exact strategy that each driver selects depending on the tyres that they have left in their individual allocations. The theoretically fastest way to tackle the 56-lap race involves one stint on the P Zero Red soft or P Zero Yellow medium and two on the P Zero White hard. These two options appear to be very close.

Managing the wear and degradation on the soft tyre is going to be crucial, so those wanting to try a one-stop strategy will only be able to do this using medium and hard, but this appears not to be easy to achieve. 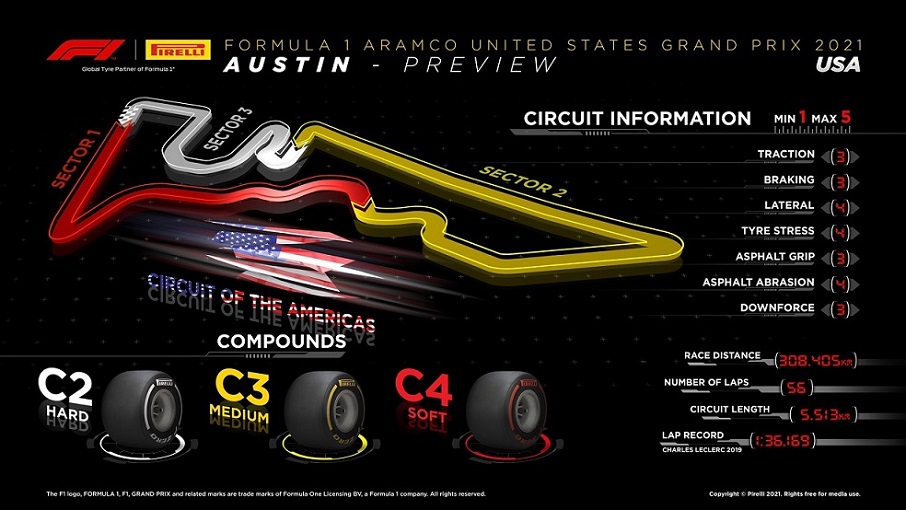 Pirelli’s Head of F1 and Car Racing Mario Isola said: “The medium tyre was favoured by the majority of the top 10 on the grid, as starting on this compound allows more flexibility in terms of strategy. Managing the softs to avoid overheating ­– especially at the rear – is crucial in these warm conditions, and this makes the medium and the hard the key choices for the race. A two-stop strategy is the more likely, with the high speeds and abrasive surfaces here taking a lot out of the tyres.

“At the same time the relatively low pit stop time loss and number of overtaking opportunities mitigate the advantages of a one-stopper. There are a number of different two-stoppers that are quite closely matched, depending on the race circumstances, so this looks set to be an intense strategic battle,” concluded Isola.

Fast facts ahead of the United States Grand Prix

By admin
13 mins ago

By admin
41 mins ago

By admin
7 hours ago