Rain was always a threat coming into the Hungarian Grand Prix weekend as it was forecasted for both Saturday and Sunday. Friday produced record-braking temperatures, but the weather conditions completely changed for race day.

However, following a shower on Satutday morning, it looked like that the showers might stay away from Mogyoród where the Hungaroring is located. On Sunday morning, fans and the paddock folk were welcomed by a heavy rain shower which ended for the Porsche SuperCup race, but another shower returned exactly for the start of the F1 race.

When the lights went out at 3pm local, it was warm again with 28 degrees ambient, plus 32 degrees of track temperature. The track then warmed up considerably after few laps, peaking at 40 degrees of asphalt temperature.

The Milan-based tyre manufacturer brought the three compounds from the middle of its range with drivers being allocated two sets of C2 hards, three sets of C3 mediums and eigth sets of C4 soft tyres in this weekend’s race in Hungary – the same nomination of compounds as it was last year.

All three compounds stood up well in the challenging conditions. The unpredictable nature of the race favoured the harder compounds, which were able to provide better graining resistance. The Hard C2 tyre was used by most drivers for the second part of the race, with some drivers completing nearly 50 laps on this compound.

The Medium C3 was the favourite choice after the re-start, with Mercedes driver Lewis Hamilton and Red Bull’s Max Verstappen selecting it also for the final stint. Alpine’s Fernando Alonso went furthest on it, completing a 36-lap opening stint.

With some uncertainty around its durability, the Soft C4 compound was selected only by two drivers: Alfa Romeo’s Kimi Raikkonen and Alphatauri’s Pierre Gasly were the only drivers to use the soft during the race, for the final stint. Gasly claimed an extra championship point by virtue of setting fastest lap with it. 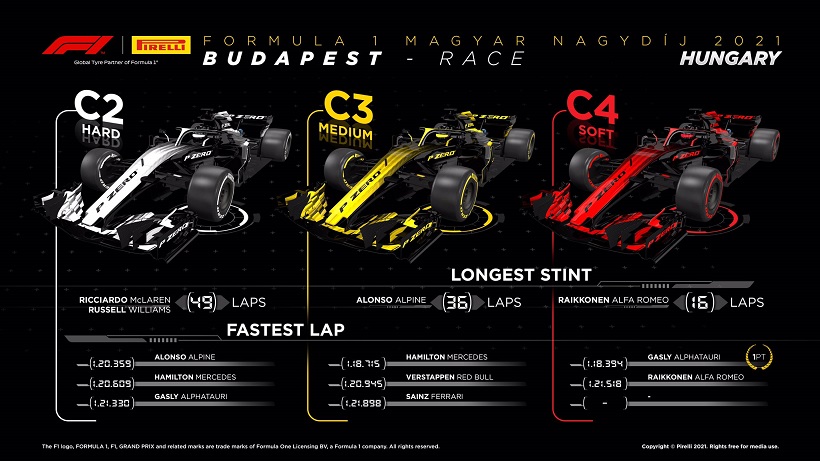 Ahead of the race, it was not sure which way teams and drivers will push towards in terms of strategy. As overtaking is at a premium around the Hungaroring, track position usually motivates drivers to complete the Hungarian Grand Prix with a single stop, but it was suggested that a two-stopper might turn out to be the faster strategy because of the heat.

Considering only the second part, the 67-lap race of the 70-lap Hungarian Grand Prix, race winner Ocon effectively re-started on the P Zero Yellow medium C3 tyre after the second formation lap and then switched to the P Zero White hard C2 on lap 37, one lap after Aston Martin’s Sebastian Vettel, who finished a close second on an identical strategy.

Of the 14 drivers, who completed the 67-lap race after the interruption, only four racers opted for a two-stop strategy. Hamilton, who led the field away for the re-start, was the only competitor to keep the intermediates and start from the grid, while all the other drivers came into the pits for medium tyres. Hamilton then pitted for mediums too at the end of the first racing lap following the re-start, rejoining last but eventually finishing third after an early switch to hard followed by a final run on mediums.

AlphaTauri driver Pierre Gasly was on course to perform a one-stop strategy, but he was instructed by his team to come in for a tyre change as Red Bull’s junior team wanted the snatch away the extra point for the fastest race lap from Hamilton.

Max Verstappen was victim of the Valtteri Bottas-induced pile-up at the first start when the Finn completely misjudged the braking point for Turn 1, ruining his own and the Dutchman’s, Sergio Perez’s and Lando Norris’ race. Verstappen could continue after Red Bull desperately carried out an intensive repair job during the interruption, but the Belgian-born driver lost the edge of the floor and the complete bardgeboard area of the right-handside of his RB16B.

He could still finish the race in the points, pitting for new hards on Lap 20 and for used medium on Lap 40. The second stop was triggered by the fact that Verstappen was unable to overtake with his heavily damaged car, and his team wanted to put him on a different strategy, hoping for better fortunes.

The fourth driver to complete the Hungarian Grand Prix with a two-stop strategy was Kimi Räikkönen. The Finn started the race on the Medium compound, then switched to the Hard on Lap 15. Lying at the bottom of the order following his penalty, he pitted for a new set of C4 compound on Lap 53 to increase his chanced in case of a late safety car period. 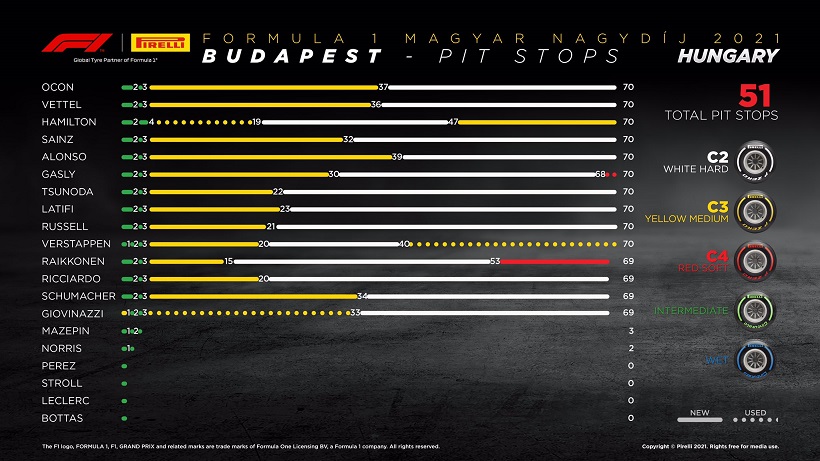 Commenting on the interrupted 36th Hungarian Grand Prix, PirellI’s Head of F1 and Car Racing Mario Isola said: “Even before the race start it was hard to make any predictions, so the race began as a complete step into the unknown today, with the drivers having no reference point for the conditions they faced this afternoon.

“The amount of water meant that the intermediates were the clear choice to originally start the race with, but with the track drying rapidly following the red flag delay, it effectively became a dry race after the re-start. If we just consider this as the ‘real’ race, some drivers selected a medium-hard one-stopper while others like Hamilton and Verstappen – who were running out of position due to the unusual race circumstances – went for a two-stop ‘sprint’ strategy. Congratulations to Esteban Ocon and Alpine for their first win,’ Isola concluded.

By admin
14 hours ago

By admin
17 hours ago

By admin
17 hours ago