When it came to race result, the Italian Grand Prix produced an unexpected and surprising result thanks to the dramatic crash between the championship protagonists Max Verstappen and Lewis Hamilton. However, when it came to the tyre performance, the 71st race at Monza was in line with the expectations. F1Technical’s Balázs Szabó analyses the tyre performance in Round 14 of the 2021 F1 season.

For Pirelli’s home race, the three compounds in the middle of the range have been chosen: the most popular selection of the season. The P Zero White hard is the C2, P Zero Yellow medium is C3, and P Zero Red is the C4.

Despite the high longitudinal loads, the Autodromo Nationale Monza is not among the circuits that put extreme loads through the tyres. The Temple of Speed is best known for its flat-out straights preceded by heavy braking areas, but with some slower and more technical sections as well. The long straights also have the effect of cooling down the tyres, which can affect the precision of the turn-in during the following corners.

The Italian Grand Prix weekend featured the sport’s second Sprint Qualifying format that brought extra excitement for fans, but additional stress for drivers and teams. Nevertheless, apart from the extra challenge, engineers were handed additional information that was generated during the 18-lap Spring Qualifying on Saturday. This ‘race’ indicated that even the soft compound can be considered as a durable race tyres after the McLarens of Lando Norris and Daniel Ricciardo showed great pace on the C4 compound, and the feared drop in performance did not arrive.

When drivers lined up on the grid for the 72nd Italian Grand Prix, the weather was warm with ambient temperatures of around 30 degrees centigrade and track temperatures in excess of 40 degrees, which remained unchanged practcally right up to the end of the race.

22 pit-stops throughout our #Fit4F1 field on the way to the 🏁🇮🇹 #ItalianGP #Formula1 #F1 #Pirelli pic.twitter.com/g8uvlBt1cM

The sprint qualifying format in Italy meant that all drivers had a free choice of tyres at the race start. All the drivers chose the medium C3, apart from Mercedes, Alfa Romeo’s Robert Kubica, and Alphatauri’s Pierre Gasly, who decided to start on the hard C2. No one dared to start on the soft compound which turned out to be a right choice as tyre wear was significantly higher than in the Sprint Qualifying, which was down to the significantly higher fuel loads which was three times higher than in the sprint race.

The 53-lap Italian race saw McLaren driver Daniel Ricciardo take his 8th F1 victory and his first for the Woking-based squad, beating his team mate Lando Norris with both drivers having used the same P Zero Yellow medium C3 to P Zero White hard C2 strategy, stopping only once. This was the most popular strategy used during the race.

The highest-placed driver to use an alternative strategy was Mercedes driver Valtteri Bottas, who started from the back following an engine change (despite claiming pole in Friday’s qualifying) and ran an opening stint on the hard tyre before switching to the faster medium at the end of the race. 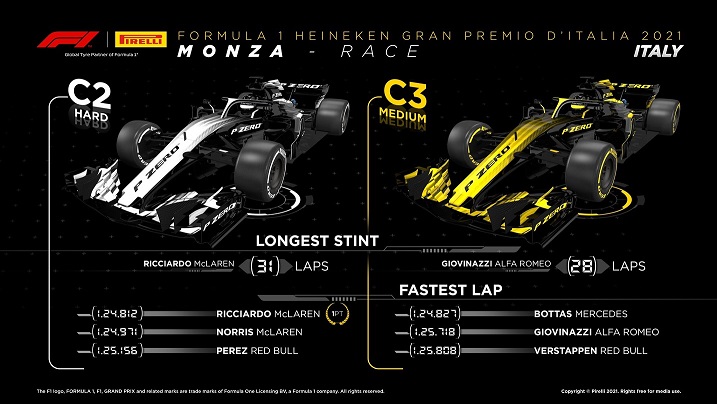 When it came to the performance of the different compounds, it was interesting to see that the only driver to run the red-walled soft compound during the race was Haas driver Nikita Mazepin, who made three pit stops. Conditions were generally too warm to make the most of this tyre.

The medium and the hard were both essential tyres to the race. The yellow-banded Medium C3 was used mostly in the first stint, showing a very good balance between degradation and performance.

Although it was a surprise after the Spring Qualifying, the warm temperatures helped to favour the P Zero Hard compound, which allowed drivers to push to the maximum with almost no degradation. Ricciardo also claimed the extra championship point for fastest lap on this compound, on the final tour.

Pirelli’s Head of F1 and Car Racing Mario Isola said: “Both McLaren drivers used the same medium to hard strategy that was adopted by the majority of the field, but Valtteri Bottas and Mercedes also showed what was possible with the opposite strategy.

“The performance of the hard tyre here was underlined by the fact that Daniel Ricciardo set the fastest lap on the final lap, having managed the race perfectly since the restart. Today’s warm weather certainly favoured the hard and medium compounds, which both showed minimal degradation, while at the opposite end of the spectrum, it was a bit too warm for the soft to show its speed advantage.”

By admin
10 hours ago

By admin
13 hours ago

By admin
13 hours ago