Today has been a physically difficult and challenging day for drivers, but the hot conditions have also tested Pirelli’s tyre compounds which were subject to extreme stress due to the temperatures. The first session took place with ambient temperatures reaching 31 degrees Celsius and track temperatures rising up to 50 degress Celsius.

Pirelli brought the C2 as the Hard compound, the C3 as the Medium and the C4 as the Soft compound for the Hungaroring, repeating the tyre choice of 2020. After Friday’s running, it seems that there are quite significant differences between the compound with the soft nine tenths of a second quicker than the medium which was a further seven tenths of a second faster than the Hard compound.

Championship leader Max Verstappen was quickest in the slightly cooler morning conditions of FP1, but he could not keep up with the pace of the Mercedes drivers in the afternoon session when Valtteri Bottas set the benchmark. On both occasions, the P Zero Red soft C4 tyre was used to set the best time.

The best lap time on the Hard compound was set by Max Verstappen, who set a 1m18.615s during the opening session. On the mediums, Lewis Hamilton was the fastest thanks to his time of 1m18.140s set during the afternoon practice. As mentioned, the soft compound was used by Valtteri Bottas when the Finn set the fastest time of the day. 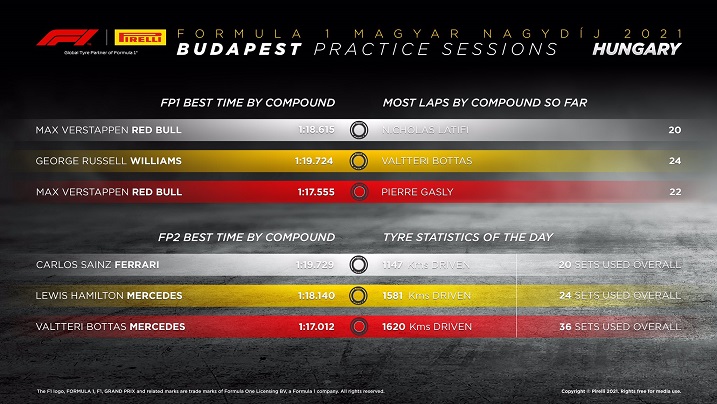 Commenting on Friday’s running, Pirelli’s Head of F1 and Car Racing Mario Isola said: “These were some of the hottest track temperatures we can ever remember so thermal degradation was definitely a factor during the longer runs; particularly on the soft compound and on the rear tyres.

„However, it’s far from certain that the weather will remain the same, with a forecast of rain at some point adding yet another unpredictable element to what is always a strategically complex race. In comparison to last year, the warmer conditions allowed the soft tyre to perform very well over a single lap.

„Nonetheless, there could be an advantage in starting on the medium tyre for the grand prix, so this will be a consideration for the qualifying strategy. With a bigger gap between medium and soft than we expected for now, getting through the Q2 session on the medium isn’t guaranteed for anybody. So there’s plenty for the teams to think about tonight,” Isola concluded.

Teams’ reactions after the physically demanding Friday at the Hungaroring

By admin
18 hours ago

By admin
18 hours ago