Valtteri Bottas was able to hang on to his starting position in Formula One’s second Sprint Qualifying, beating Max Verstappen and the McLarens of Daniel Ricciardo and Lando Norris. Reigning champion Lewis Hamilton could only finish fifth after a slow getaway from the line.

After beating his team mate Hamilton in yesterday’s qualifying session for the Italian Grand Prix, Bottas controlled the 18-lap race at Monza that determines the grid for Sunday’s grand prix. However, the Finn will not be in high spirits as the change of multiple power unit elements means that he will start Round 14 of the 2021 F1 season from the back of the gird.

The start was always going to be an eventful action given the length of the run-down to Turn 1 at the Autodromo Nazionale Monza. McLaren opted for an aggressive strategy by choosing the Pirelli P Zero soft compound for both Ricciardo and Norris.

As the lights went out, Hamilton had a nightmare start and dropped behind his main championship rival Verstappen, Pierre Gasly and the McLaren duo. However, the 2020 Monza winner made contact with Ricciardo at Turn 1 which damaged his AlphaTauri. The French driver flew off the track at the high-speed Curva Grande, hitting the wall. Safety Car was deployed which enabled the marshals to clear the track.

A frantic start. Gasly goes off at the Curva Grande. He’s radioed to the team that he’s ok.

And the Safety Car comes out #ItalianGP 🇮🇹 #F1Sprint pic.twitter.com/uOT2mbxTaX

Elsewehere, there was contact between AlphaTauri’s second driver Yuki Tsunoda and Alfa Romeo’s Robert Kubica with the Polish driver spinning around at the second chicane. However, the one-time race winner was able to get his Alfa Romeo back into the right direction and rejoined the field.

The Safety Car was in by Lap 4 with Bottas having a great restart, preventing Verstappen from any chance of overtaking him into Turn 1. On the same lap, Fernando Alonso managed to get past Sebastian Vettel at the first Lesmo corner.

Meanwhile, Hamilton was desperate to find the way past Norris to try to join the action at the sharp end of the field. After losing a position at the original start, Red Bull’s Mexican driver Sergio Perez was eager to make up some ground to improve his chances in tomorrow’s 53-lap Monza race.

At the front, Bottas managed to open a 1.5-second gap in front of Verstappen, who was instructed by Red Bull not to risk anything. Norris received track limits warning as the Bristol-born driver exceeded the limits at the Michele Alboreto corner multiple times. Hamilton was gaining on Norris with the help of the drag reduction system, but he could not get close enough to try an overtaking manoeuvre into the first chicane.

Meanwhile, the two Ferraris were watching the battle between Hamilton and Norris in P6 and P7 after a very difficult morning. Charles Leclerc was forced to use an older power unit following technical problems with his third engine in yesterday’s qualifying. On top of that, the Monegasque was feeling unwell in Free Practice 2.

Leclerc’s team mate Carlos Sainz made a mistake on his long run in FP2 which saw him lose the rear end of his Ferrari at the Ascari chicane, crashing into walls. Despite the huge damage, Ferrari was able to repair the Spaniard’s car, which enabled him to take part in the second-ever F1 Sprint. 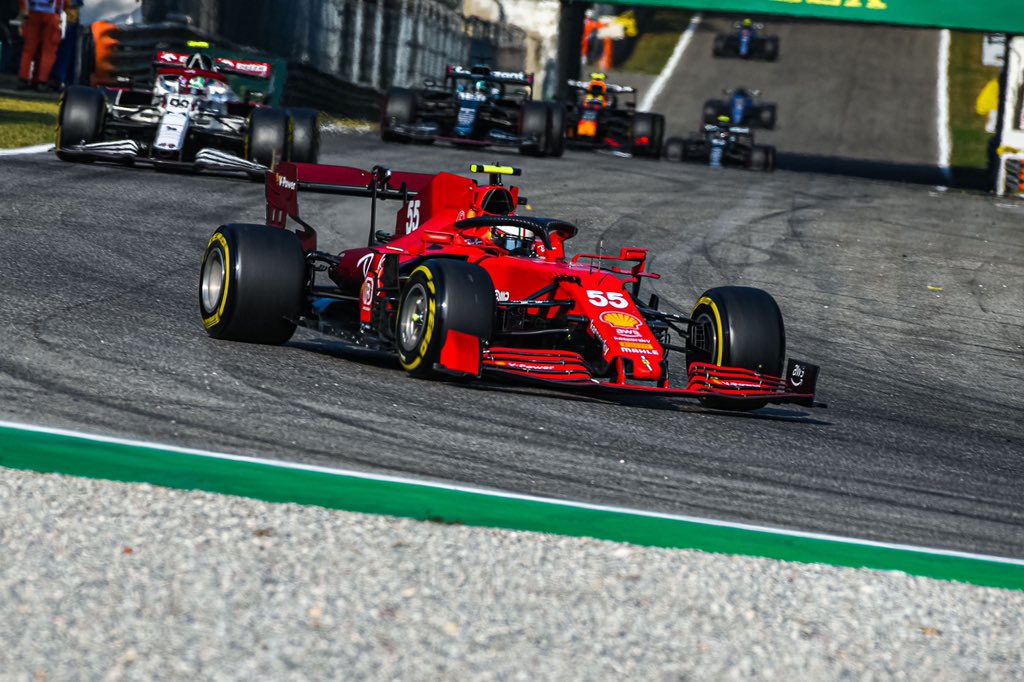 On lap 9, Perez overtook Stroll for P9, but he was instructed by his team to give the position back to the Belgian-Canadian driver as he left the track when making the pass on Stroll. The Baku race winner then got his act together on the next lap, overtaking the Aston Martin racer into Turn 1.

With only four laps to go, Hamilton was hoping that the soft tyres on the McLaren start to go off. However, the red-walled tyres seemed to hold on well, and it was actually Hamilton, who almost lost his W12 at the first Lesmo turn as he picked up the throttle.

In the meantime, Perez closed in on Antonio Giovinazzi, who is literally racing for his seat at Alfa Romeo. The Mexican was adamant to get the Italian past to secure a better starting position for tomorrow, but he was ultimately unable to get the better of Martina Franca-born driver.

At the front, nothing has changes with Bottas controlling the Sprint Qualifying. The Finn crossed the line at the end of Lap 18 to claim three points for the F1 Sprint win, 2.325s ahead of Verstappen who took two points. Securing his best result so far with McLaren, Ricciardo finished third to add a point to his tally.

P2 for @Max33Verstappen in the #F1Sprint 👉 Pole for the race 💪 #ItalianGP 🇮🇹 pic.twitter.com/FyCJpLzrXl

By admin
12 hours ago