Two of the four F1 engine suppliers, Ferrari and Mercedes decided to install fresh internal combustion engine into all its cars for the Azerbaijan Grand Prix, Round 6 of the 2021 FIA Formula One World Championship.

For the 2021 FIA Formula One World Championship, exhaust systems have been added to the list of limited-use components, with each driver allowed no more than eight per season.

All of these drivers will also race with a fresh turbocharger which is one of the three units allowed for the 2021 Championship season. Furthermore, all of them will use a fresh motor generator unit – kinetic at the Azerbaijan Grand Prix. 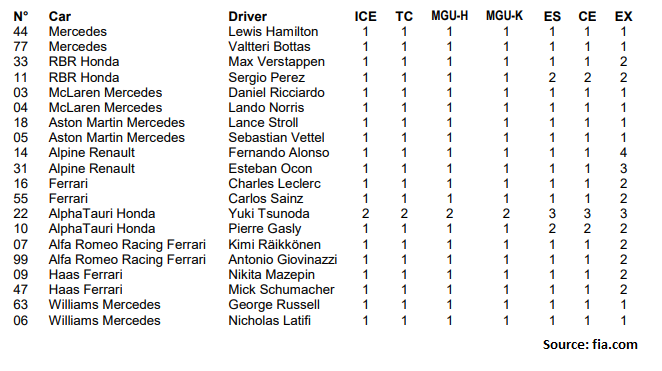 Nikita Mazepin is the only driver to have access to a new control electronics. With drivers allowed to use only two CE units during the season, the Russian has to complete the rest of the season with the previous and the fresh one if he wants to avoid a grid drop penalty.

The two Mercedes, Ferrari, McLaren, Aston Martin, Williams, Alfa Romeo, Haas and Alpine drivers will use a new exhaust system at Baku. The six Ferrari-powered cars have already used two EXs, but the situation is more complicated for the Alpine duo as Fernando Alonso has used four and Esteban Ocon three exhaust system of the eight units allowed in 2021.

Two drivers will race with a fresh gearbox at Baku with Charles Leclerc and Mick Schumacher using a new unit. The Monegasque did not start the last race in Monaco while the Swiss-born German had to replace his previous gearbox for a spare one, meaning that none of them will get a penalty for the change.

By admin
8 hours ago

By admin
8 hours ago

By admin
1 day ago